I had originally planned to come out to New Bern for a week and then Dorian decided to start brewing in the center of the Atlantic and so we watched and we planned and schemed and then decided that going to the Zoo probably wouldn’t be the best bet but stocking up on meals, water and beer probably would be better. 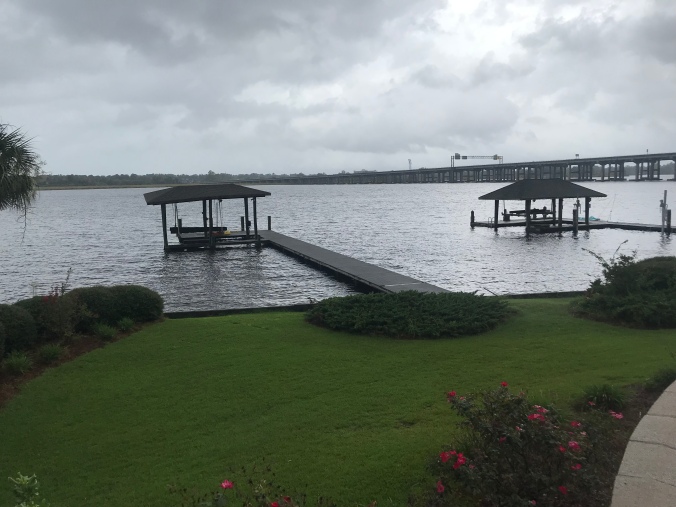 I flew in Wednesday and then we drove back down to New Bern just in a nick of time of a movie and bed time. We watched the news, watched the alerts. Talked about whether or not it would hit us or turn back out to sea. Would it slow down or pick up. The destruction it already caused and what we should prepare for.

Thursday all us girls got up had breakfast and started the day with preparation. We cooked meals, prepared Tupperware with ice, made banana bread, filled the tub, watched the news alerts more. Watched the sky, played in between the rain and watched movies. We took a drive around town, visited family and then came home once evening hit to relax and wait.

I myself have never experienced a hurricane before. Growing up in Ohio depending on the hurricane we would get the after affects that would then be a tropical storm by that point. Kelsey and I stayed up waiting for things to either pick up or calm down. For a few hours there had been tornado warnings. So we stayed up until the warnings had died down. We watched romantic comedies, had cookies, let the girls play and we watched the sky turn and wield itself as the rain belted down. 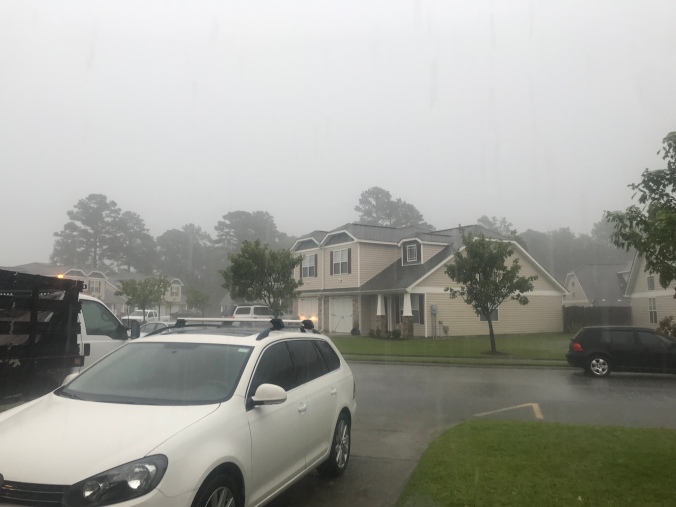 The clouds hung low in the sky, almost as if you could reach out and touch it. The rain turning itself from cloud to droplets within reach. The clouds had quickened its pace as if knowing it was losing energy but needing to let out whatever else it had to say.

As we had stood outside watching last night watching the clouds turning. The cyclone right above us a part of me was sitting back in class reading about clouds, weather, atmosphere and then, there I was standing, watching it all.

We finally went to bed around 2 in the morning. The wind howled, the rain pelted and whipped at the windows. Without much attempt my eyes shut closed and I didn’t come to until morning. I heard Kelsey shuffling around the kitchen, I heard one of the girls move around and cry or talk, my first thought was of coffee and to sleep more. When I finally made my way downstairs there was indistinct mention of the power being out. At 8 in the morning after only what seems like a few hours of sleep power doesn’t really seem to be much of an issue. Sleep is of more concern even as the last of the storm is passing through. We all gathered on the couch Kelsey and I pleads for 20 more minutes. Not nearly sufficient but with two restless children who got a full night of rest seems to almost be a begging and bartering system.

At 4 am the eye wall hit New Bern and Morehead City got the eye. The winds picked up speed and rather than the trees swaying heavily in the wind the trees bent as if making way as a road for a nascar race. Kelsey heard and watched all this. The wind waking her as I slept cold out upstairs. Which is when the power had gone out, why Kelsey was more tired than normal and why as we went outside to see the effects I noticed a little more slight bend to the trees.

The rain and wind came and went throughout the morning and by 11 the rain was gone and the sun was starting to make its entrance. We played outside in the neighborhood for most of the morning and by lunch time we were ready to go check out the rest of town and to head to the beach. 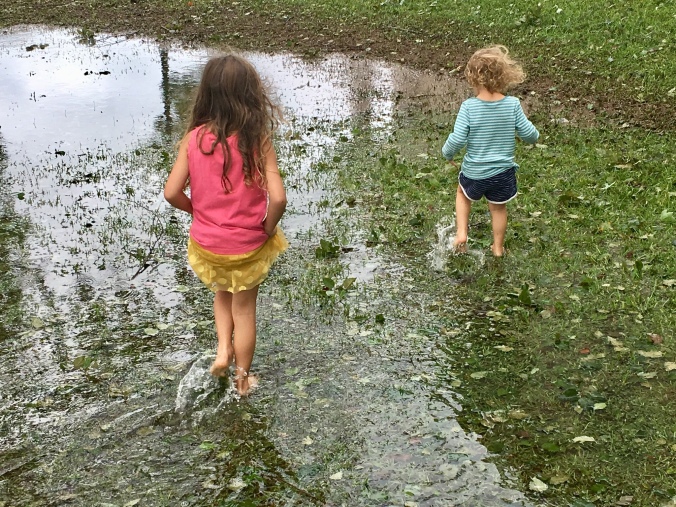 We had no major flooding and we waited to see if they had lifted the city wide curfew and then we packed up the car and headed over to Atlantic Beach to see if we couldn’t find any drift wood.

We picked up bits and pieces of driftwood, found plenty of seashells, discovered the shapes of the sand after a storm, found turtle eggs that had come up from their warm nest in the sand (and tried not letting little hands playing with them). We walked, and said hello to the other beach goers, and then checked the rest of the island for anything majorly amiss.

When we got home and was getting out our meals for dinner and scheming on fall decorations the power kicked back on.

We finished the night with another walk around the neighborhood and a movie.

We are grateful that no major damage has occurred here. Last year was devastating and many people have still been trying to recover even from Florence and Micheal from last September. 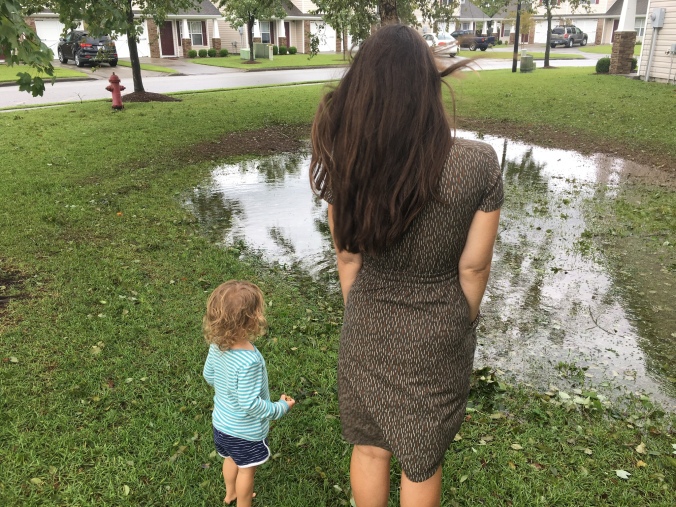 It’s devastating what happened in the Bahamas and the full affect of what the hurricane spilt onto the island. I hope the the island can and will recover and will be able to get the aide it needs for the people so they can have their homes and jobs back. 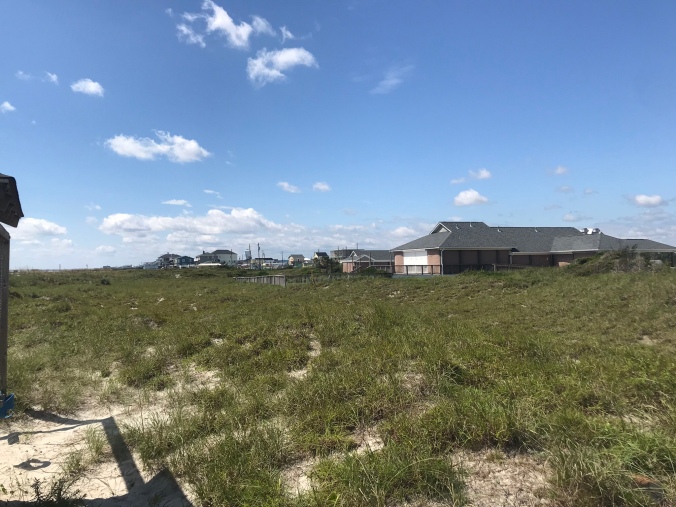 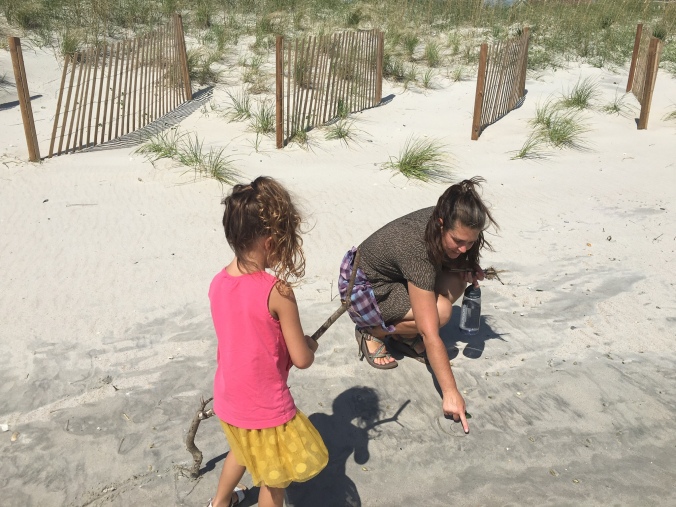 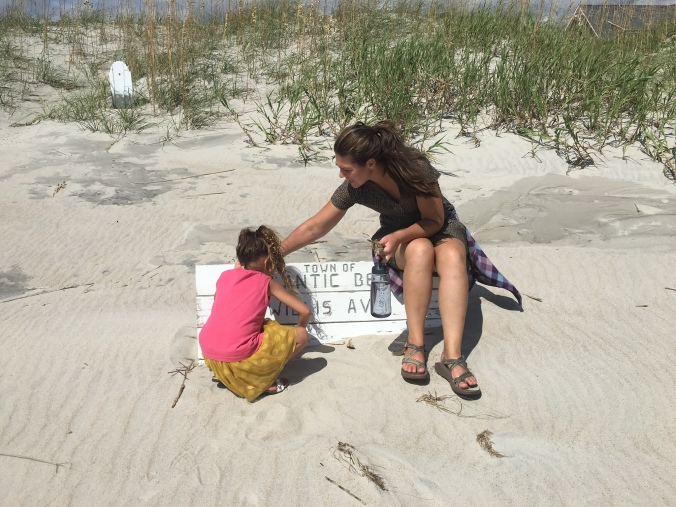 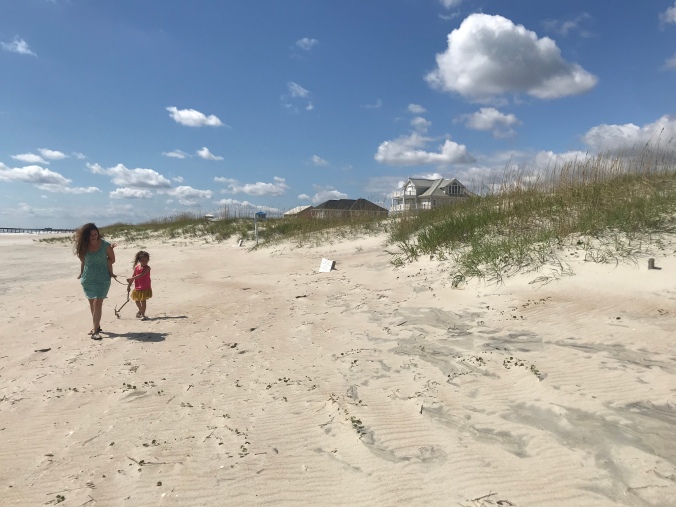 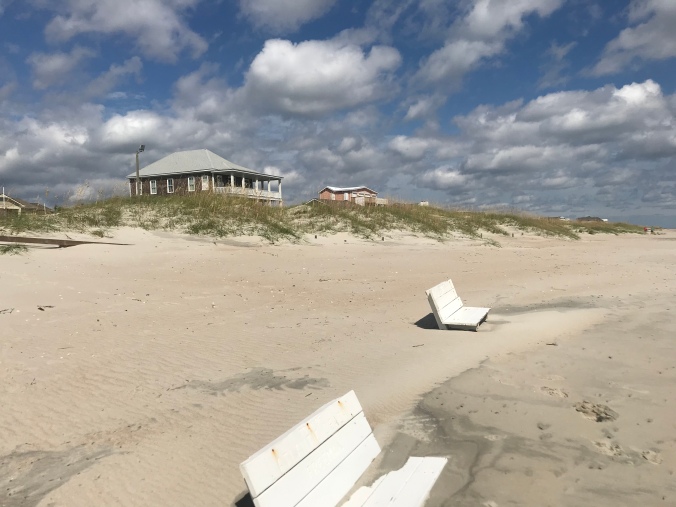 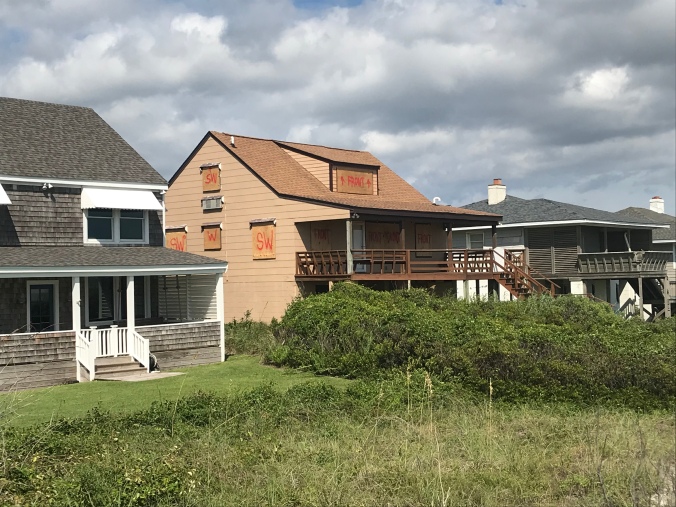 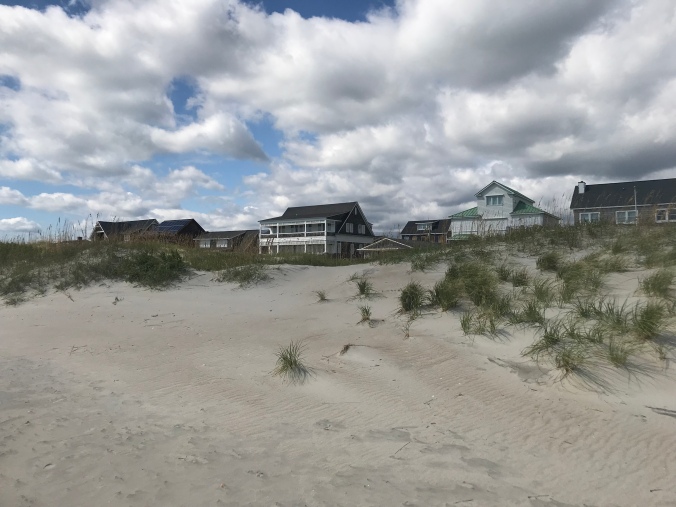 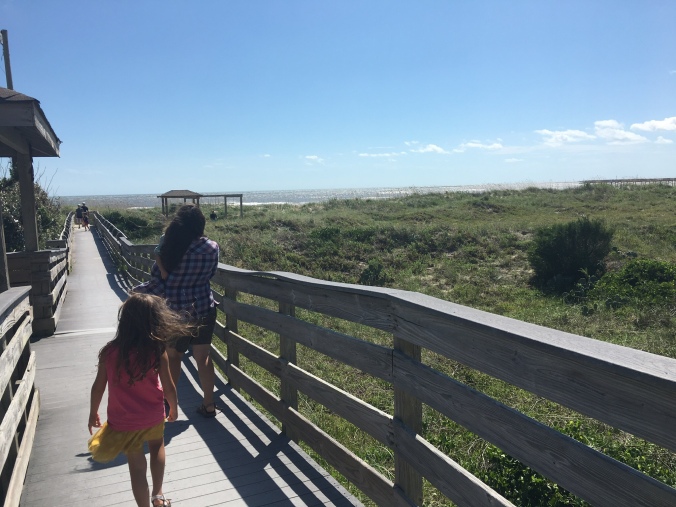 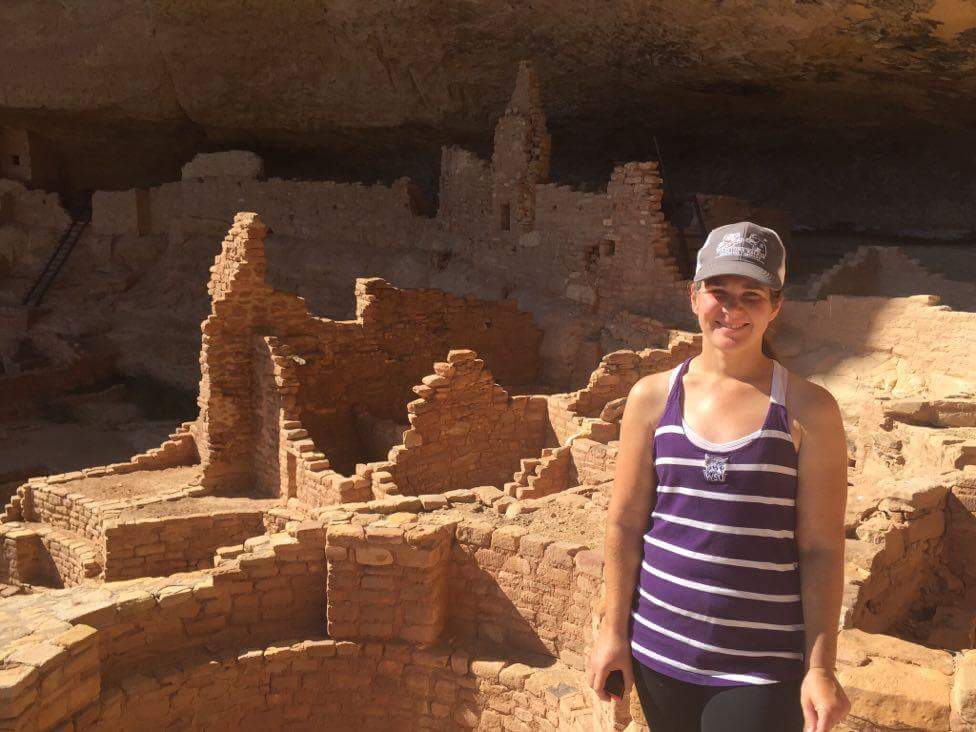 Hello! Welcome to the blog. I am Jess the blogger, traveler and avid adventure posting weekly updates of the places I explore in and around "home". Please follow along :)

2019 Year end review not all of the pictures but some of the highlights. Dominique Republic, Germany, Ireland. Started out in Dallas,tx moved back to SLC, have four new roommates. Been Coast to to coast. Visited Boston for the first time and NYC. Met some amazing people and got to spend more time with those I already love. This year hasn’t been perfect but what year ever is? I’m grateful for where I am in life and for what it’s brought. Looking forward to more travel in 2020 and more time spent with my family and friends. #happynewyearseve #happynewyear #yearendreview2019 #traveler #flightattendantlifestyle #travelblogger #utahblogger
This is a couple days late but I still wanted to recognize my ‘sister’s birthday. I was flying that day but want to say a Big Belated Birthday. I hope this birthday week is something wonderful and you do something special for yourself because you deserve. Thank you for being such a big support system for me this past year. It’s means everything to me. I am so grateful that I have been able to visit you this past year. Thank you for keeping a room open to me, for yummy delicious food, lattes, good laughs and conversations. I am grateful you are alive and that you always have room for those you love. P.S also thank you for Huckleberry. I love being his aunt. I could just gobble him up.
We need to talk about something.... my mind is just a little bit blown away by this street. I’ve been wanting to see this street decked out for Christmas for a long awhile now and I am so glad that I happened to get put on a trip last minute where I got an overnight here in LAX. Candy Cane Lane did not disappoint. Swipe for more pics and videos. What other cities/towns that should be visited during the holidays? #candycanelane #california #christmas2019 #travelblogger #utahblogger #holidaycheer
Wednesday Nights are $5 nights at the Utah History Museum. It’s been awhile since I have taken myself out anywhere so I decided it was high time to do that. Winters have always been my favorite time to visit a museum anyways. #historynightout #naturalhistorymuseumofutah #utah #slc #dinasours