I have been itching to have days in the water and have it really feel like summer time.

Over the weekend I went to Grand Rapids, MI and then to Denver, CO.  I got the crew to come out with me for some fun in the sun and on the lakes.  Actually it was more than easy to get them to explore and adventure with me.  They were a little sad at first when I had mentioned I wanted to go paddle boarding and they were like “Are you going to invite us?”.

That was me being a bad crew member.  Always invite your crew even if you think they will say no.

Now I am glad that I did. We had a great time a lot of good laughs and sometimes it makes it easier doing things with others.

When we got to the hotel we hurried up and changed then got an Uber from our hotel to Millennium Park and then rented paddle boards and kayaks for $10 each for an hour.  They have trails, beach swim area and a splash pad.

It’s been awhile since I have been out on a paddle board. So when I first had gotten out on the water with it, the board didn’t really want to go where I wanted it to go.  Come to realize I was standing on the wrong end of it. Thinking that it was the front of the board.

We played out on the water for an hour and then got requested an Uber to get back to the hotel to meet up with one other crew member for dinner.  There wasn’t a whole lot of options for Uber’s and Lyft’s in Grand Rapids and certainly not out by Millennium Park.  We had to wait for a good while before a driver accepted and then got out to where we were.

And yes, I am rocking that fanny pack with pride.  I have been thinking about getting one for years now, but hadn’t.  I ended up getting this one in the Salt Lake International Airport in our one outdoor sportswear store.   It is now a staple in my carry on bag.  Everyone’s wallets, phones and anything else they didn’t want wet went in.

I say free the hands, free the pockets and free the backs. 🙂

On Saturday we flew back into Denver headed to our hotel and the other flight attendant had a car so we all piled in there after she grabbed that and we all got ready for the day.

We decided since it was Saturday and still early enough we all wanted brunch so we went to Moonlight Diner.  It’s on your way to the airport and I have to say it is such a fun Diner and such good food and drinks.

After brunch we went over to Walmart to grab some things for the afternoon and then went over to Aurora Reservoir.

We were a bit disappointed with how little they spaced the swimming area out for everyone.   It was all families there so the swimming portion that they allowed you was crammed with children.  They then had that blocked and you couldn’t go past lest you wanted a whistle blown at you.  They had a deep end on the other side of the blocked off area but you could only lap swim.  I kinda of think they scared anyone from even going into the lap area to even do laps.  They also had had everyone get out every 45 minutes for 15 minute breaks and adamant about even the adults getting out of the water as well.

They closed the beach down at 6 and everyone had to be off the beach at that time.

We ended up finding another area within the reservoir to go relax and swim a little longer.  We ended up having a great time  throwing the football around in the water and just hanging out.

We also had a wonderful sunset as well at the end as we where heading out.

Summer to me just doesn’t feel fully like summer until I have had some water time. Which I realize I did have some beach time back in June…but that was June. It’s now August.

So to close I would go back to Millennium Park in Grand Rapids, I probably wouldn’t go back to Aurora Reservoir in Denver but I would always recommended Moonlight Diner. 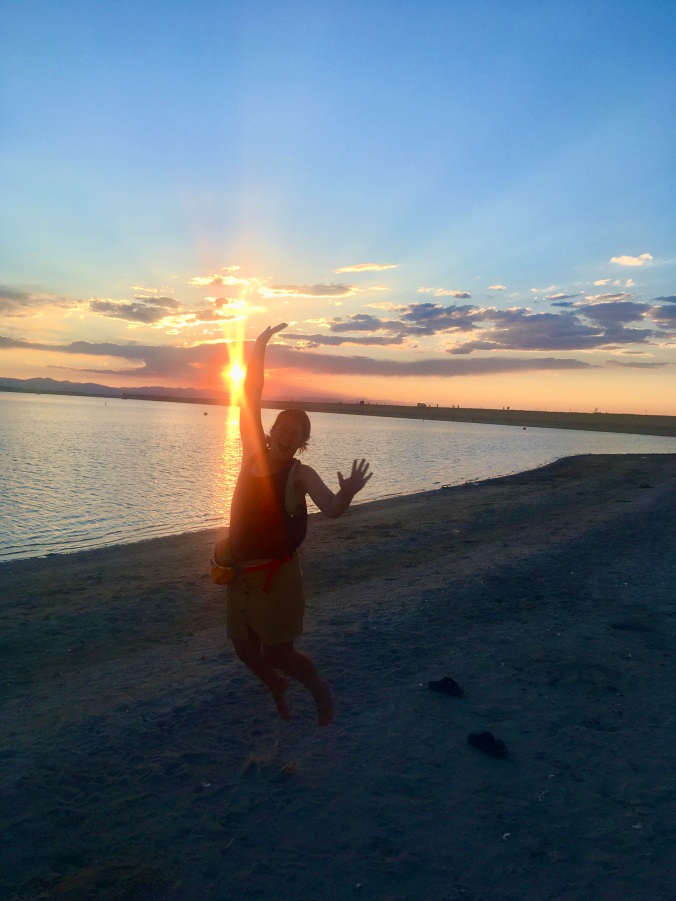 What are your water places in Grand Rapids?

And for Denver where is the place to go play?